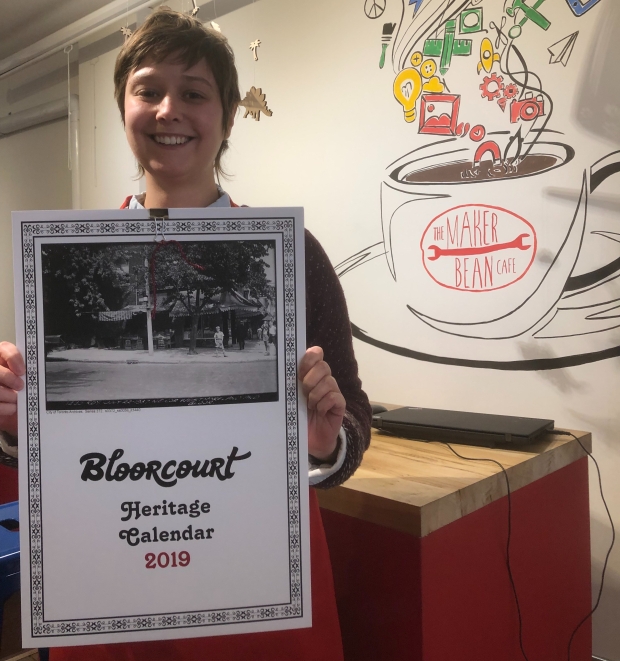 Emily Bosschaart, manager of The Maker Bean Cafe with the 2019 Heritage Calendar. It’s on sale at the cafe and two-other locations in Bloorcourt—or by email. See below

As part of its fortieth anniversary, Bloorcourt BIA has published a limited-edition calendar containing archival and rare photographs of street scenes from our neighbourhood. Each photograph is accompanied by historical commentary and a month-by-month diversity calendar.

The Bloorcourt BIA (Business Improvement Area), made up of Bloor Street West between Dufferin Street and Montrose Avenue, is the seventh oldest of eighty-three BIAs in the City of Toronto.

Beginning with the Rosina Shopkeepers’ Project—a unique initiative that celebrated the mainly immigrant shopkeepers and builders of Bloorcourt and was awarded with the 2015 Toronto Community Heritage Award—Bloorcourt has been supporting research into its heritage.

The limited-edition Bloorcourt Heritage Calendar can be purchased for $20 from the following shopkeepers and locations in Bloorcourt:

You can also order a calendar by sending an email to bloorcourt2019@gmail.com.

All proceeds from sales will be donated to THE Working Women’s Community Centre’s Community (WWCC) Community Engagement Program.

Congratulations to WWCC, which is celebrating their twenty-seventh year in Bloorcourt! 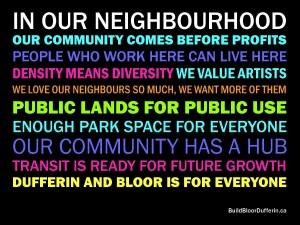